A new (and free) app has been gaining traction on various campuses across the country. It’s the Companion app and is aiming to help keep students safe.  It was developed by five college students at the University of Michigan and works like this:

Users plot their destination on a map based on their GPS location. They then choose any number of friends who in essence become virtual companions as they walk their path. The key is to pick a few friends or family members in case some aren’t near their phone.  The companions are chosen from the user’s contact list and don’t need to have the app installed. Instead, they will be directed to an interactive map that shows the end point of the user’s journey, as well as the breadcrumb path and progress made by the user. At the end of the walk the virtual companions are notified that the user made it to his or her destination.

On the phone screen, the user will see two large touchscreen buttons. One says I am Nervous. The other is Call the Police. The I am Nervous feature has already received accolades as it has allowed local law enforcement to map clusters of areas that need extra patrolling. 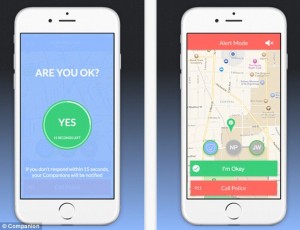 If the user pushes the Call the Police button, the app will first check to see if it is an error.  If there is no response in 15 seconds, it contacts the police with the exact GPS location – and if the university has partnered with Companion – also notifies the university police, as well as notifying all companions.

Another feature that sends out a warning is based on user movement.  If the user starts to run, deviates from the outlined path, or if earbuds are yanked out of ears, a notice is sent out.

While it certainly does not mean a user should throw caution to the wind and walk anywhere willy nilly, it clearly adds another layer of security.

You can check out Companion here.